Should You Consider Investing in a College Town? And Where?

HomeBlogsShould You Consider Investing in a College...
August 28, 2018 by Evelyn Carey in Blogs 0

Investors have many options when deciding how to direct their IRA funds. One popular asset in which to invest is a property located in a community that’s home to a college or university. Why should you consider investing in a college town? For one thing, there’s a healthy student population providing ample potential tenants to help generate a positive ROI for your investment. 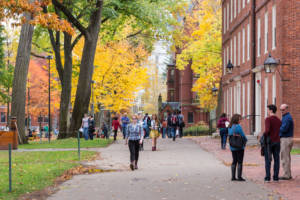 Why Should You Consider Investing in a College Town?

A college town is unmistakable, even when you don’t know that there’s a university in its midst. The rapid turnover, pedestrian- and bicycle-heavy streets, large apartment populations and diverse lifestyles land these towns in the category of things people seem to either love or hate.

But what if you’re investor? Are they good business, or are they more trouble than they’re worth?

That depends on the city, says a recent report from Homes.com titled “The U.S. Landlord Index: College Towns and Cities.” While many college towns seem similar, your return on investment can vary widely based on where you buy. The top towns in the report brought investors an ROI of 13 percent to 14 percent, while the lowest-ranked college towns yielded ROIs of only 2 percent to 3 percent.

The pros? Besides the ROI, you always have an available market filled with potential renters. Some seniors stay in their college towns after they graduate, and there’s a new wave of freshmen every fall. So supply and demand tend to stay fairly evenly mixed.

The cons? College students can be harder on rentals than long-term tenants. They tend to be younger, have less disposable income (which means rents can’t go as high) and – while not all students are the same, by any means – in general they maintain their apartments to a lesser degree than do more adult tenants. So background checks, deposits and first-and-last-month rent agreements are critical.

That said, here are some of Homes.com’s recommendations for the best and worst college towns for investment purposes:

The report looked at 150 college towns and ranked them according to the ROI returned from a 3-bedroom house with an average purchase price and monthly rent in each location. It ranked them overall, and then broke them into big cities, midsize cities and small cities.

The University of Illinois at Urbana Champaign and Parkland College is in Champaign, Illinois, which takes the top spot nationwide. The average yield for landlords there was more than 14 percent. Close behind was Rochester, N.Y., home to the University of Rochester, Roberts Weslyn College and more, at 13.49 percent. New Haven, Conn., also is home to several colleges, Yale being the main one; it offers a yield of 12.14 percent. Rounding out the Top 5 were McAllen., Texas, at 11.16 percent, and Providence, R.I., at 10.93 percent. The state of Texas made the largest showing in this category, with McAllen, Corpus Christi, Killeen, Laredo and El Paso all appearing in the Top 20.

Homes.com notes that while bigger isn’t always the best, bigger cities do offer a larger selection of potential tenants. In this category, where towns and cities have more than 300,000 population, Corpus Christi comes out on top (home to Delmar College and Texas A&M University-Corpus Christi), with an average yield of 10.52 percent. Close behind is Baltimore, Md. (Johns Hopkins, University of Maryland-Baltimore, Morgan State and Loyola) at 10.16 percent; El Paso (Texas Tech, University of Texas-El Paso) at almost 9 percent; Arlington, Texas (Arlington Baptist, University of Texas-Arlington) and Milwaukee, Wis. (Marquette, University of Wisconsin-Milwaukee), both at 8.75 percent. Texas again has the most schools in this category, with Corpus Christi, El Paso, Arlington, Fort Worth and Houston. Notably, Austin  – home to the University of Texas – is not included; it has recently been called “the most difficult across the large Texas markets right now,” and “a victim of its own success” by a Forbes magazine article about home ownership in the Lone Star State.

Small college towns are towns with populations of less than 125,000, and Homes.com notes that these can provide the biggest yield. Champaign, Ill., is at the top here at 14.02 percent; Urbana, Ill., home to the University of Illinois at Urbana-Champaign, yields 10.9 percent. Rounding out the top five are Statesboro, Ga. (Georgia Southern University), at 10.5 percent, Ithaca, N.Y. (Cornell, Ithaca College) at 9.03 percent, and Bloomington, Ind. (Indiana University-Bloomington) at 8.94 percent.

“There are good reasons to prefer one college town over another,” writes Ingo Winzer in a Forbes article titled, “How to Earn an ‘A’ When Investing in Rentals in a College Town.”

“What’s the financial situation of the college? Is it private or publicly funded? Are there other economic engines that will drive demand for housing (maybe a technology industry or an affiliated hospital)? You’ll have to do some homework.”

The article offers a chart that lists 33 college towns by college, population, average home price and average rent, which is part of a formula that tells you whether renting a property as a single home or converting it into multiple units is more profitable.

And if you’re considering buying a property in a town because your child is going to attend college there, so much the better, says The College Investor, and investing and personal finance site targeted toward millennials.

“Buying a home as an investment, and allowing your child to stay in that home during their college years lets you invest the money you would otherwise pay to the college or some other apartment complex, into your own property. You are essentially paying yourself,” the site says.

“The beauty of this scenario is that your child can also bring in roommates who are charged a rental fee, thus offsetting your costs for the home even further. In many cases you’ll be able to cover the entire cost of the property through the rental rates of the roommates, thus securing free housing for your child.” Upon graduation, you have the option of keeping the home and renting it to others, or selling it and getting your investment out of it.