A new report from Bankrate.com (cited below) provides a look at the retirement-savings trends over the last year. How does this compare to your habits? And if you are among those who have cut back on their savings, we invite you to explore the other information on our website that may help you find a way to effectively build your retirement portfolio instead. 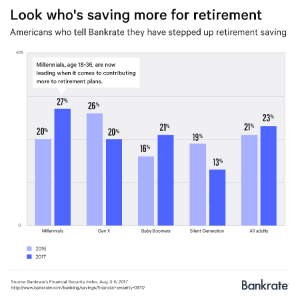 Are you saving more for retirement?

According to the Bankrate.com report, 23 percent of working Americans increased their retirement savings contributions this year compared to last year, the highest reading in six years of polling. Another 16% indicate they have reduced their contributions over that time.

The encouraging findings mark a stark turnaround from the 2011 results when just 15% increased their retirement savings contributions and 29% had cut them. Still, 5% of working Americans didn’t contribute to retirement savings at all this year or last year, though that number is half of what it was in 2015.

“Working Americans are increasing their retirement savings more and more as the economic recovery continues, whether by saving the same percentage of higher earnings or a higher percentage of the same earnings,” said Bankrate.com’s chief financial analyst Greg McBride, CFA.

McBride recommends saving a minimum of 10% – and ideally 15% – of your income for retirement, utilizing an employer-sponsored retirement account and an Individual Retirement Arrangement (IRA). “If you or a spouse have earned income, you are eligible to contribute to an IRA. In the absence of a workplace retirement savings plan, it is even more imperative to open an IRA and put money away on a tax-favored basis for your financial future.”

Every age group under age 63 is more likely to have increased rather than decreased their contributions. Younger Millennial workers (18-26) lead the way, with 30% increasing their retirement savings over the past year.

Those working part-time are nearly twice as likely to have reduced (33%) rather than increased (17%) their contributions.

The Bankrate.com Financial Security Index rebounded slightly from 105.3 to 105.8 this month. This is now the third highest reading ever, trailing only the 106.7 in June and 106.5 in March. Any figure above 100 is indicative of improved financial security over the past 12 months.

The survey was conducted by Princeton Survey Research Associates International. PSRAI obtained telephone interviews with a nationally representative sample of 1,002 adults living in the continental United States. Interviews were conducted by landline (501) and cell phone (501, including 303 without a landline phone) in English and Spanish by Princeton Data Source from August 3-6, 2017. Statistical results are weighted to correct known demographic discrepancies. The margin of sampling error for the complete set of weighted data is plus or minus 4.0 percentage points.